March 27, 2020 Solvang, California: While creating videos for equestrians who are sequestered for the time being, it made perfect sense to also create a hashtag campaign for the person who can use this time to learn more with their horses, #sequestrian.

It’s a privilege, I know, and one should not take it for granted if lucky enough to have the time and resources to focus on the unique qualities of horses. Whether you have access to a horse or not, there are plenty of skills to learn and to practice.

The Bowline is both easy to tie, and most importantly easy to untie, even after being subjected to heavy pulling. It creates a non-slip loop that won’t tighten down onto the object you’ve tied it to.

The Clove Hitch knot is great for securing things to your saddle horn and will hold your lead rope on the saddle horn perfectly. You can use it to attach a rope to a pole or ring, secure enough to prevent the knot from sliding along the pole. This can keep horses spaced along a hitching rail and is still a somewhat quick-release knot. It is a knot which can hold things together or pull things like a log that would otherwise allow to slip.

A quick-release knot is fast and easy to tie, making it especially useful for tying horses. But the real value of the quick release knot lies in its ability to be easily untied in the event of an emergency. If a horse panics while tied and pulls back on the rope, a single tug on the end of the lead will free him.

Another great way to read and learn about the nature of horses, and how to train them, is by reading other horse lover’s questions and a bank of tried and true answers. There is an free archive of 804 reader’s questions and Monty Roberts’ answers compiled since 2004 in a searchable data base, updated weekly.

MONTY ROBERTS first gained widespread fame with the release of his New York Times Best Selling book, The Man Who Listens To Horses; a chronicle of his life and development of his non-violent horse training methods called Join-Up®. Monty grew up on a working horse farm as a firsthand witness to traditional, often violent methods of horse training and breaking the spirit with an abusive hand. Rejecting that, he went on to win nine world’s championships in the show ring. Today, Monty’s goal is to share his message that “Violence is never the answer.” Roberts has been encouraged by Her Majesty Queen Elizabeth II with the award of the Membership in The Royal Victorian Order, as well as becoming Patron of Join-Up International. Other honors received were the ASPCA “Founders” award and the MSPCA George T. Angell Humanitarian Award and FEI’s Man of the Year. Monty was recently included as Horse and Hound Magazine’s Top 50 Horsemen of All Time. Monty is credited with launching the first of its kind Equus Online University; an interactive online lesson site that is the definitive learning tool for violence-free training.

JOIN-UP philosophies can be seen at work with both humans and horses across the world, from farms to major corporations. To learn more about Monty Roberts or the many applications of his Join-Up training methods, visit www.montyroberts.com. Horse Sense and Soldiers aired on Discovery Military in 2010 highlighting the therapeutic effect horses and Monty Roberts’ Join-Up® have on PTSD. Soon after Monty and his team developed the Horse Sense & Healing program for veterans and first responders. Lead-Up International was officially launched worldwide at the Monty Roberts International Learning Center in Solvang, California, in February 2017. The purpose of Lead-Up International is to reduce violence in the community by creating peaceful leaders from vulnerable youth utilizing equine-assisted therapy and non-verbal communication, building trust-based relationships.

DEBBIE ROBERTS LOUCKS joined her parents, Monty and Pat Roberts, in 2002 to build Monty Roberts’ international training schedule and oversee their publishing, product development and licensing. Monty Roberts is the world renowned Horse Whisperer and New York Times Bestselling author of The Man Who Listens to Horses. Pat Roberts is an internationally acclaimed sculptress of horses. A graduate of UCLA, Debbie has extensive experience in marketing as well as new business development. Debbie’s life-long work with horses, as well as her commitment with Monty to advance his concepts, uniquely qualifies her to extend the MPRI brand into a global leadership organization which has impacted millions of individuals, companies, organizations, governments and industries. Debbie is host of HorsemanshipRadio.com, one of the most popular podcasts on the global Horse Radio Network. Learn more about Debbie at http://www.linkedin.com/in/debbieloucks 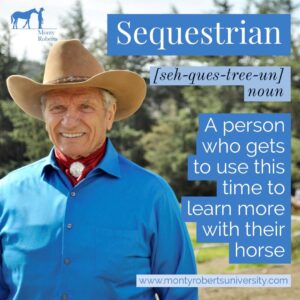